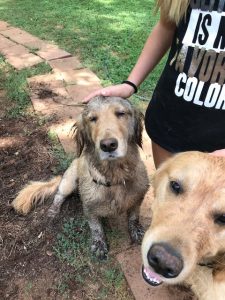 Last Thursday, I took Alice and Toby, the Golden Retrievers who are in my care (that’s another story), on a walk at the Gracie Ditch, a shaded path bordered on one side by the water district canal. For Goldens and Labs the place is dog heaven. Alice loves getting wet and then rolling in the dirt. She is one dirty girl!  We go on this three to five mile walk at least four times a week.

Here’s the routine. I have coffee, feed the dogs their breakfast, put on my boots, grab my pack, and by 7:30 we’re out the door. The dogs race to the car and jump in. Ten minutes later, we’re on the trail. Sometimes we meet up with friends and other times we go it alone. With all the in and out of the water and stopping to chat along the way, the walk takes about two hours.

Last Thursday it was just the three of us. We got back home around 9:30. The dogs were filthy, so I let them in to the back yard to dry off and I went around to the front to take off my boots and hang my pack and keys on a hook.

It’s a routine—something I do without thinking.

That afternoon I went to a movie with my friend Jane.  She drove so I didn’t take my keys—at least I don’t think I did. In case you’re wondering, the front door has a keypad, so no key required.   I didn’t need my car again until Friday morning. I was dressed and ready to go to the gym and I couldn’t find my keys.

Of course, I could take the spare, but that’s not the point. Certain the keys were on the hook, I couldn’t believe they were missing. Instead of going to the gym, I decided I’d tear the house apart until I found them. They have to be here. I drove the car home!

Because I’m essentially a minimalist, my house is NOT full of unnecessary stuff. Finding things should be fast and easy.

I searched my purse, my pack, the cloth grocery bags that hung on the hook, the couch, under the pillows, under the couch, the kitchen cupboards and drawers, the fridge and the freezer. Thinking that I might have dementia I even looked in the toaster oven! From there I searched my office. I moved my desk, file cabinets and bookshelves.  Both bathrooms and the bedroom were thoroughly searched. The bed was stripped and moved it to the other side of the room. Close hamper was thoroughly searched. I checked pockets. I emptied every drawer.

During my search I found five tennis balls and dust bunnies that were hiding under the bed but no keys.

Rewind twelve years. I returned from a business trip. Unpacked the car and the keys disappeared only to be found ten years later. While they were missing, I was certain a poltergeist lived in the house.  Turned out, they fell next to the car in leaves and duff and spent the next ten years right where I dropped them.  Oh no! Not again.

I went outside and searched the car—the glove box, under the seats, the trunk. I hunted around the car. And, I searched the garage. Nada. Nothing.

If it’s nailed down, Alice will steal it. She loves playing “you can’t catch me.” It occurred to me that perhaps I’d left the keys on the bench where I take off my boots and that Alice grabbed them when I wasn’t looking, took them outside and dropped them somewhere in the back yard. I spent the next several hours combing half an acre to no avail. Still no keys.

I had two “psychic” friends come over and help me look. Still nothing. Sigh. I burned sage. I talked to my subconscious….where are my damn keys?

I’m a firm believer that when annoying, frustrating, or bad things happen there’s a lesson to be learned.

What did I learn?

It wouldn’t hurt to be a bit more mindful—especially when it comes to routines and those things I do on auto pilot.